We have a beautiful lake in our neighborhood that we don’t use often enough despite the 5 minute walk over there. On this particular evening Lia wanted to take pics over there so we decided to change that and go as a family.  She and I split off to take some shots on the earthen dam while Noah and my husband headed over to a fishing spot.  Of all the times we’ve tried fishing at this lake we’ve come up empty handed.  Just a few nibbles but nothing that came to shore.  This time we landed on a pocket of perch that were quite hungry.

It only took a few casts before he landed his first fish – I arrived just in time to catch it on camera!  The elation and wonder on Noah’s face was awesome (I was watching vs. photographing at this point).  He worked hard to reel it in. It was surprisingly strong for how tiny it was.  No matter, it could have been a minnow and he would have been just as excited.

From that fish and for the next hour they were both pulling in perch after perch.  I have a feeling we caught the same guy a few times but in a catch and release lake I suppose that’s a reality for the fish.  Even my little princess got in on the action – pretty dress and all.  I think the photo below is a pretty solid representation of her.  All princess but following everything her brother does 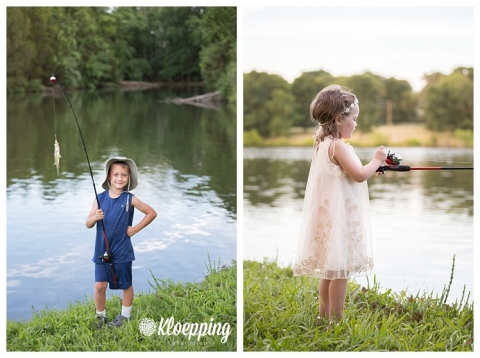