My kids have been on me all summer what going to the beach. Weirdly enough, we are only like like 2 hours from the nearest “shore” but always preferred to head south to the OBX for our beach fixes. This year however we were a little late on the draw and didn’t end up finding a suitable place in the OBX so we were looking for other options. Thankfully we have family that has a house in Chincoteague and other family just further up the shore in Delaware. So, we decided to make it a long weekend and visit a few places.

The unintended theme of our trip was “old childhood haunts”. Our first stop was the same place that my husband vacationed to as a child – Cape Henlopen State Park. When we arrived in the AM he laughed – it was exactly as he remembered it 30 some years ago. As we walked up out of the parking lot past the little cafe I could see that he was reliving those fun filled days of his childhood. The joy on his face as he introduced our children to a place that he held dear in his memories was so exciting to see. (we even did a family selfie that’s unfortunately on my phone and not on my computer)

As the beach filled up, we decided to have a quick bite to eat at the cafe and then make our way down to our next stop – Rehoboth Beach. This place also held a spot in my husbands heart as that’s where they spent many summers, on the boardwalk and beach. Since we’d already done the beach thing we stayed on the boardwalk and rode a bunch of rides at Funland (which apparently hasn’t changed all that much since the last time he was there). He did note that the boardwalk was no longer elevated which lead to a research mission to figure out when and why it changed. We couldn’t leave the boardwalk without a stop for some Grotto Pizza so after an early dinner we headed on our way to Dagsboro, DE where we spent the night with his Aunt and Uncle.

In Dagsboro we spent some quality time with the fam but I also took a little walk down the road from their house out to the marshland area to catch a few picks of the egrets and herron’s.  Word on the street was that there was a bald eagle nest back there too but I didn’t see anything:(

We even convinced Mark’s aunt and uncle to join us in a quick game of cornhole!  Mark’s a shark and shut out any opponent regardless of how we were paired up. 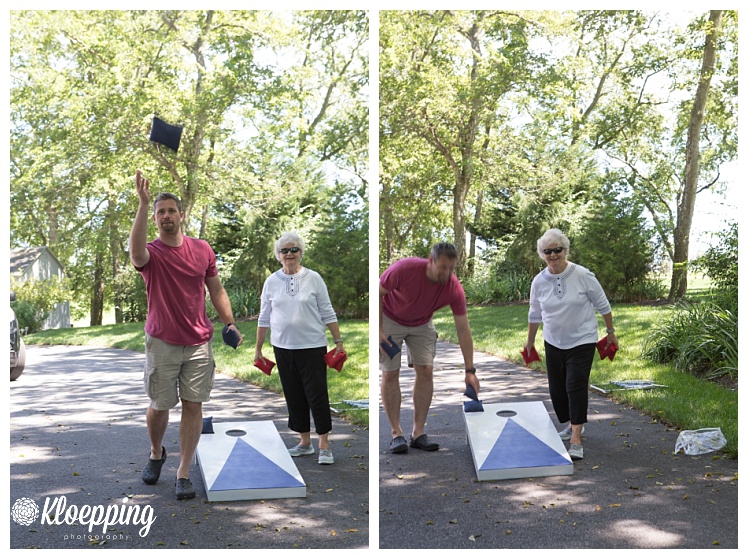 The next morning we were off on our way to Chincoteague, Va to spend a few days with his sister and brother in law. Again, this place is full of family memories. His brother in law grew up spending his summers in the town. His parents had a place at one of the local camp grounds and would spend their days out on the boat or down on Assateague Island.  They introduced us to many of the local haunts both on land and in the water like the tidal sandbar.  As the tides shift out and in the sandbar grows and shrinks.  At it’s largest it’s a few football fields in size, at it’s smallest, maybe a half a ball field or less.  A vast majority of the time you can walk on and on in knee deep water – it’s trippy!  (below: B was the only one who agreed to let Mark bury him in the sand…it was almost a disaster with the dogs:) )

Now grown with kids of their own, they decided to buy a place right on the canal. J has spent the last year and a half working to fix it up and it’s beautiful! The perfect size for their family to spend the summers away down at the shore.

They bought their own boat this past winter and it gets a ton of use! I think this was perhaps Noah’s favorite part of the whole trip. He was J’s first mate, helping out wherever needed help and learning all he could about having a boat.  Our weekend consisted of hanging at the house on their porch, crabbing off the pier and going out on the boat.

We set a few crab pots off the pier but took two other larger ones out with us to drop in the channel before we headed out for the day.  We grabbed them on the way back through and had enough keepers for an appetizer before dinner.   There were enough for everyone to have 3 good sized crabs (which, if you know Maryland Blue’s you know that’s just the perfect amount of meat for an appetizer:) ).

Out on the boat the kids (and dog) took turns sitting on the bow and enjoying the wind in their hair.  It was a beautiful day to be out on the water.  The sun was peeking in and out of the clouds and the breeze generated from the movement of the boat kept everyone cool

Back on the dock the kids were taking their turns trying to catch minnows with a net.  These munchkins have yet to learn the element of surprise and being quiet is not their strong suit. Still, they managed to snag a few little fishies for the bait box.  In the end I was really sad to see our time away come to an end – as always.  I really enjoyed visiting some of the more memorable places in our lives and creating those memories for our kids.  The time they hung out with their cousins on the boat will be something that sticks with them as they grow.  Wonderful memories! 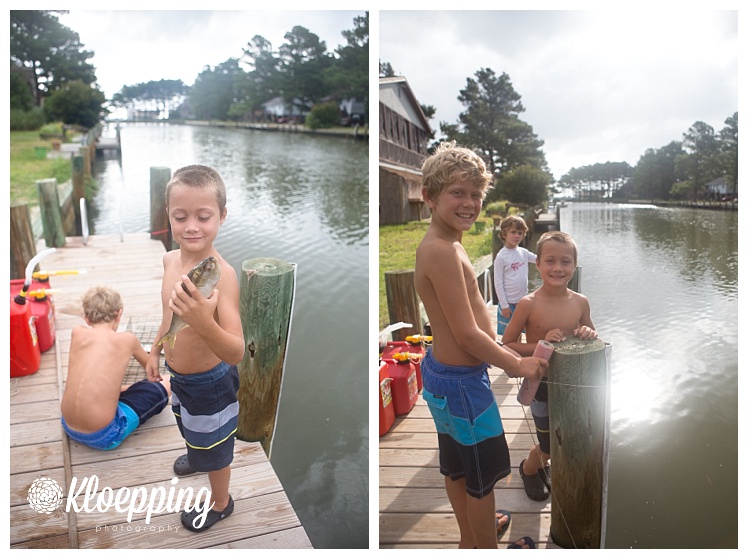